Apple is set to hold its first event of 2022 on Tuesday, March 8 at 10:00 a.m. Pacific Time. Apple’s spring events sometimes aren’t as exciting as the September and October events, but it’s nice to have new devices on the horizon in the new year.

For the 2022 spring event, we’re expecting a refreshed version of the iPhone SE, a new iPad Air, a possible Apple-branded display, and at least one new Apple silicon Mac, which could be a whole new Mac mini/Mac Pro hybrid called the Mac Studio. We’ve rounded up everything that we might see at the March 8 event below, including last minute rumors.

The 2022 iPhone SE is going to look just like the 2020 ‌iPhone SE‌, with no design changes expected. Apple’s current ‌iPhone SE‌ is modeled after the iPhone 8, featuring thick top and bottom bezels, a Touch ID Home button, and a 4.7-inch LCD display. 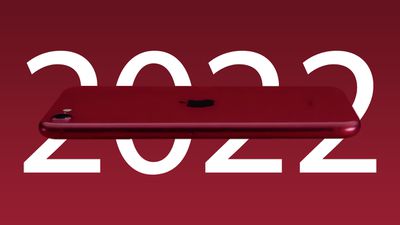 Wireless charging will be supported, but we’re not expecting MagSafe, nor are there likely to be notable changes to battery life. The current ‌iPhone SE‌ is available in black, white, and red, and we are likely to see similar color options.

With no design changes on the horizon, the updates to the ‌iPhone SE‌ are all internal. We’re expecting a faster chip, and the ‌iPhone SE‌ could get the same A15 chip that’s in the iPhone 13 for a drastic increase in performance. Storage is rumored to start at 64GB, with Apple offering 64, 128, and 256GB options.

The other major new feature coming to the ‌iPhone SE‌ is 5G connectivity, which will put the ‌iPhone SE‌ on par with the flagship iPhones when it comes to connection speed. Apple’s ‌iPhone SE‌ will be the cheapest 5G iPhone, and it is expected to be priced at $399.

The only other rumor we’ve heard about the ‌iPhone SE‌ is a possible updated camera, so it could get the latest Wide camera from the ‌iPhone 13‌.

There’s a new version of the ‌iPad Air‌ in the works, but like the ‌iPhone SE‌, there are no design changes expected. The next-generation ‌iPad Air‌ will continue to look like the current ‌iPad Air‌, though there’s a possibility we could see new color options. Right now, the ‌iPad Air‌ comes in space gray, silver, rose gold, green, and blue. Purple has been floated as one of the possible new colorways for the ‌iPad Air‌.

Rumors suggest that much of the ‌iPad Air‌ update will focus on bringing the device in line with the sixth-generation iPad mini released last fall, so could get an updated A15 chip, which Apple added to the ‌iPad mini‌ after introducing it in the ‌iPhone 13‌ models. There is, however, a rumor suggesting that Apple will add the M1 chip that’s been used in the iPad Pro to the ‌iPad Air‌, putting performance on par with Apple’s higher-end tablets.

For cellular ‌iPad Air‌ models, Apple will add 5G connectivity, so the updated devices will work with faster 5G networks. The chip in the ‌iPad mini‌ is limited to sub-6GHz 5G networks rather than the fastest mmWave 5G networks, so it’s possible we could see this same limitation in the ‌‌iPad Air‌‌.

Sub-6GHz 5G is the more widely available version of 5G that can be found in urban, suburban, and rural areas across the United States and other countries, while mmWave 5G is more limited in availability and in range.

AT&T and Verizon have recently expanded their 5G networks with C-band spectrum that improves the availability of mmWave networks in the U.S., so it’s possible Apple will take this into account when updating the ‌‌iPad Air‌‌.

The ‌iPad Air‌ will feature mostly internal changes, but it could get the same updated 12-megapixel Ultra Wide front camera that will work with Center Stage, a feature first introduced in the ‌‌iPad Pro‌‌ and the ‌‌iPad mini‌‌ 6.

Center Stage is a FaceTime feature designed to keep you in focus and perfectly framed when you’re on a ‌‌FaceTime‌‌ video call. The wide-angle front-facing camera shows more of the room that you’re in, while the processor inside the iPad works to keep you front and center even as you move around. If more than one person is in the call, the camera will also zoom out to keep everyone in view.

The rear camera is expected to continue to feature a single-lens setup, though a quad-LED True Tone flash could be added. As for other features, it will continue to use a USB-C port, and we’re not expecting notable changes to battery life.

Pricing on the ‌iPad Air‌ is likely to stay the same, so the new model could be priced starting at $599 for 64GB storage.

According to Miani, the “‌Mac Studio‌” will be around four inches tall (the ‌Mac mini‌ is 1.4 inches tall), and it will have a new thermal design for heat dissipation along with more USB-C ports. Prior rumors have suggested that Apple is working on both a smaller version of the ‌Mac Pro‌ and a high-end version of the ‌Mac mini‌, and those rumors may all be related to the new ‌Mac Studio‌. The updated Mac will be equipped with Apple’s M1 Pro and M1 Max chips, and perhaps a chip that’s even more powerful than the ‌M1 Max‌.

The ‌M1 Pro‌ and ‌M1 Max‌ chips feature a 10-core CPU with eight high-power cores and two high-efficiency cores, though there is also an 8-core version used in the 14-inch MacBook Pro. As for GPU performance, the ‌‌M1 Pro‌‌ chip features a 16-core GPU (14-cores in the base model 14-inch MacBook Pro), while the ‌‌M1 Max‌‌ features a 32-core GPU. The ‌‌M1 Pro‌‌ chip supports up to 32GB RAM and the ‌‌M1 Max‌‌ supports up to 64GB, so the ‌Mac Studio‌‌ will continue to offer support for up to 64GB RAM.

Early rumors suggested the high-end ‌Mac mini‌ would get a new look, perhaps with a smaller casing size that has a plexiglass-like top and a two-tone color scheme, but rumors about the ‌Mac Studio‌ suggest it will have a cube-shaped body that’s much thicker than the current ‌Mac mini‌.

Apple completed work on one of the external displays that it is working on “months ago” and originally planned to launch it after the 2021 MacBook Pros, so there is a chance that we could see it at the spring Apple event.

Apple is working on a Pro Display XDR successor and a more affordable consumer-oriented display, and it’s this latter model that has a chance of being introduced tomorrow.

YouTuber Luke Miani, who does not have an established track record for accurately predicting Apple’s plans, has said that the new 27-inch consumer display will be called the “Studio Display” and that it is launching at the event alongside a “‌Mac Studio‌” machine.

Miani shared renders of the alleged display, which looks similar to the Pro Display XDR with slim bezels and a slim footprint. ‘s ‌Mark Gurman‌ has also said that the display is ready to launch, and that there is an A-series chip inside.

A few rumors have suggested that Apple will introduce an updated version of the 13-inch MacBook Pro at the spring event, but it’s not clear if that’s accurate as the machine will likely use an updated M2 chip, but other Macs that are also going to adopt the ‌M2‌ chip, like the refreshed MacBook Air, aren’t launching until later in the year.

It’s questionable that Apple would introduce the ‌M2‌ chip in the 13-inch MacBook Pro at this point in time, but it’s not out of the realm of possibility.

If there is a refreshed 13-inch MacBook Pro coming, it’s not going to get a major design refresh. It will look like the prior-generation version, though there is mixed information on the Touch Bar. ‘s ‌Mark Gurman‌ has said that Apple will remove the Touch Bar from the 13-inch MacBook Pro, while other leaked information has suggested it will stay.

As an entry level machine, the updated 13-inch MacBook Pro will not include a mini-LED display, nor is it expected to support 120Hz ProMotion refresh rates.

The ‌M2‌ chip that Apple has in the works is expected to have the same 8-core CPU as the ‌M1‌, but there will be speed and efficiency improvements as it could be built on a smaller node. As for GPU improvements, it will have additional GPU cores. 9 and 10-core GPU options are expected to be available, up from the 7 and 8-core GPU options available in the original ‌‌M1‌‌. The ‌‌M2‌‌ will not be as powerful as the ‌M1 Pro‌ and the ‌M1 Max‌, which will be succeeded by the ‌‌M2‌‌ Pro and ‌‌M2‌‌ Max.

Hints of the M2 Apple silicon chip have been spotted by a developer in the latest macOS Monterey 12.3 beta, but that doesn’t necessarily mean that it’s coming in the spring. The chip has been confirmed to feature an 8-core CPU and upgraded 10-core GPU.

One last minute rumor claims there will be no notebook computers at all, so we may not be seeing the new MacBook Pro.

Last year, Apple added a purple iPhone 12 to the ‌iPhone 12‌ lineup, and this year, rumors suggest we could potentially see a green color introduced. This same rumor also suggests the ‌iPad Air‌ will be available in a new purple color.

New ‌iPhone‌ case colors were leaked on Twitter at the end of February, and it’s likely these cases are going to be released following the March event. New colors include a light blue, a darker green blue, an orange shade, and a yellow.

It’s also likely we’ll see these same colors available for ‌iPad‌ cases and perhaps Apple Watch bands. Apple won’t focus on these new cases on stage, but we’ll see them added to the online store after the event.

Apple has been beta testing iOS 15.4, iPadOS 15.4, and ‌macOS Monterey‌ 12.3 since late January, and now the updates are nearly ready to launch. The software may not come out on March 8, but Apple will likely provide us with launch date information and release candidates could also come following the event.

iOS 15.4 is a huge update that brings support for using ‌Face ID‌ while wearing a mask if you have an ‌iPhone 12‌ or newer, plus it introduces new emoji characters, lays the groundwork for Tap to Pay, adds a Siri voice, and improves the anti-stalking functionality of AirTags.

‌macOS Monterey‌ 12.3 and iPadOS 15.4 add the long awaited Universal Control feature that’s designed to allow multiple Macs and iPads to be controlled with a single mouse/trackpad and keyboard. We have a full guide with all of the new features coming in iOS 15.4 for those who are curious about what’s included.

Apple will live stream the March 8 event on the Apple Events website, YouTube, and in the Apple TV app on the ‌Apple TV‌ and other platforms.

For those unable to watch a live stream, will provide live coverage both here on MacRumors.com and through our MacRumorsLive Twitter account.