Apple in iOS 15 introduced Focus mode, an expansion of Do Not Disturb that allows you to set up different permissions for apps, contacts, and more depending on what you’re doing. You can have separate tasks for when you’re at work, when you’re studying, when you’re at home, and more. 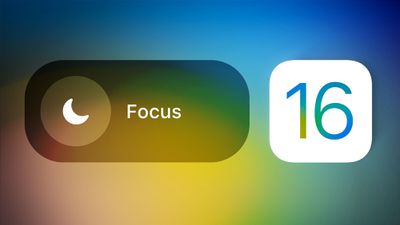 In iOS 16, coming as a public beta in July and a full release likely in September, Apple has improved Focus with new features, and this guide covers everything that you need to know about using Focuses in ‌iOS 16‌.

Setting up a Focus is more straightforward than it was before, with a new personalized setup experience for each Focus that you create.

Apple used to drop you right into a confusing array of options for doing things like allowing people and apps for notifications, but now there’s an explainer that lets you know how all the Focus features work, and a streamlined process for selecting your options.

With the Silence Notifications section, you can choose the apps and the people that are able to contact you when a Focus is turned on, and Apple has added options to allow or silence notifications from select people, which wasn’t an option previously. With ‌iOS 15‌, you could only choose allowed apps and allowed people, rather than specific people and apps to silence.

Apple walks you through choosing who to allow calls from as well, plus you can go through the customize screens interface, set Focus schedules, and add filters to block out certain email inboxes in Mail, Safari Tab Groups, and more, which we outline in the sections below.

With ‌iOS 16‌, you can customize everything about your Focus, including what the Home Screen, Lock Screen, and Apple Watch face look like. You can select from any of the Lock Screens that you’ve created, linking it to a Focus mode. You can also create a new Lock Screen from the Gallery.

For the ‌Home Screen‌ customization, you can select any one of your existing app pages to serve as your main ‌Home Screen‌ for the Focus mode. So if you want to create a ‌Home Screen‌ with specific apps for a Focus, you’ll first need to set up an app page by rearranging your apps.

As for the Apple Watch, if you are an Apple Watch owner, you can select one of your Apple Watch faces to activate on your wrist for a specific Focus mode.

If you’ve set up a custom Lock Screen, ‌Home Screen‌, or Apple Watch face for your Focus and change your mind, just tap on the “-” symbol to clear it.

You can create custom Lock Screens in ‌iOS 16‌, and each Lock Screen can be associated with a different Focus. That means you can set a Lock Screen to coincide with a Focus, giving your phone a different look throughout the day.

If you have a work focus, for example, you can set up a Lock Screen with the style and widgets that are useful for your job, and then when at home, you can have an entirely different setup.

After that, the Lock Screen will have a little icon at the bottom that lets you know which Focus it is linked to. Then, to activate the Focus, you can just swap over to that Lock Screen, so it’s super easy to change Focus modes.

Note that you can also go through this setup process in the Focus section of the Settings app. Just open it up, select the Focus you want to use for a Lock Screen, and choose the “Customize Screens” option that’s described up above.

When you’re creating a Focus, Apple says that iOS can suggest Lock Screens for the Focus option, like a photo Lock Screen when you’re home, and a more data-central set of options for when you’re at work. Apple also offers suggestions for ‌Home Screen‌ pages that have the apps and widgets that are most relevant to the Focus you’re selecting.

Focus Filters are an entirely new feature in ‌iOS 16‌. With this option, you can choose to filter out content within apps, displaying a specific Mail account or Calendar, if you have multiple. When you use a Focus with a filter set, the app with the filter will only show what you’ve selected, hiding everything else.

Here’s what you can filter out with Focus Filters:

Apple made a Focus Filter API for developers so third-party apps can allow the same specific filtering options within a Focus as Apple’s own app. If you use a third-party email app, for example, you’ll be able to select a mailbox to show within that app provided the developer adds the Focus Filter API.

Apple has made it easier to control whether apps can let people know that you have a Focus activated and are silencing notifications. With the “Focus Status” section, you can choose which Focus modes are permitted to share that you have your notifications silenced.

You can block a Focus mode from sharing that information, so people won’t be informed that your notifications are off if they try to message you. This was possible to set in ‌iOS 15‌, but in ‌iOS 16‌, it’s simpler to get to and manage.

If you wanted to block out a specific person or app prior to ‌iOS 16‌, there was no easy way to do so because you could only allow contacts and apps. For example, if you wanted to block out just the Messages app in ‌iOS 15‌ while leaving everything else accessible, you would have to “allow” every other app. That’s not the case in ‌iOS 16‌, as you can choose apps (or people) to silence.

Have questions about the ‌iOS 16‌ Focus option, know of a feature we left out, or want to offer feedback on this guide? Send us an email here.