The first reviews of the iPhone 12 in Apple’s newly-introduced Purple color option for the spring have now been shared by various media outlets and YouTubers, and the overall consensus is that the new color is more of a lavender shade than purple. 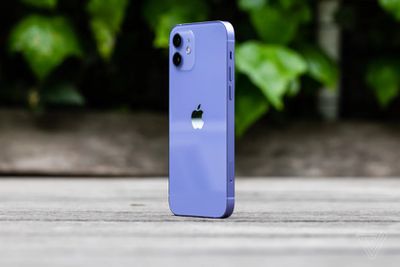 ‘s Dieter Bohn described the new color as “more like a lilac,” but still said that it was unmistakable:

It’s a lightish shade of purple. One might be tempted to call it lavender, but to me it’s a bit more like a lilac or maybe a wisteria. It lacks the redness you’d expect in a mauve or the blue tones you’d see in a violet. There are many shades of purple, but this one is what Apple went with and I like it. It’s unmistakable even at a distance, whereas the light green iPhone 12 models could be mistaken for off-white in certain light. I am also glad it doesn’t have a fancy name. It’s just “purple.”

‘s Brenda Stoylar said that the new color is “very pretty,” and similarly noted that it is “more of a periwinkle or a lavender” than purple.

Chris Velazco of also noticed the more subdued nature of the purple, but interestingly observed that it is “roughly the same pastel shade that last year’s purple iPhone 11 came in.”

Apple is also releasing a new MagSafe Leather Case and Leather Sleeve in Deep Violet, a Silicone Case in Capri Blue, Pistachio, Cantaloupe, or Amethyst, and a Leather Wallet in Arizona, which are all available to order now.