First impressions of the third-generation iPhone SE have now been shared by select media outlets and YouTubers, providing a closer look at Apple’s latest entry-level iPhone. Reviewers praised the device’s improved specifications, but were disappointed with its aging design and lack of Night mode. 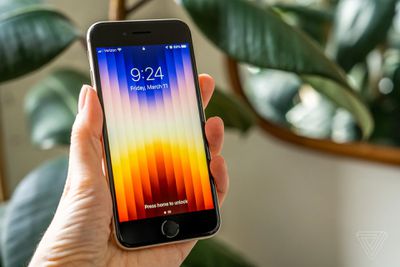 The new model added the A15 Bionic chip from the iPhone 13, 5G connectivity, an upgraded rear camera with more advanced computational photography capabilities, improved battery life, and stronger glass. The third-generation ‌iPhone SE‌ will begin arriving to customers and be available in stores starting this Friday, while delivery times are now slipping into late March.

‘s Allison Johnson criticized the new ‌iPhone SE‌’s design and display, commenting that “It’s a tired design straight out of 2017 that makes an already-small screen feel even smaller than it could be.”

Unfortunately, that cutting edge performance is hampered by the small screen. It’s not a bad display – it’s a 4.7-inch 750 x 1334 pixel LCD that gets plenty bright for outdoor use. But you don’t get a faster refresh rate, which would make scrolling look a little smoother, you don’t get the same pop and punchiness of OLED, and it’s definitely one of the smallest screens sold on a new smartphone today. Text looks small at the default setting, and you can enlarge it, but that means doing more scrolling.

But phone design has moved on in the last two years, and the SE has stayed firmly in the past. Given just how many times per day most of us look at our phone screens and interact with them, I think it’s fair to demand a little more from your mobile device’s screen than the SE is offering.

‘s Cherlynn Low praised the device’s more durable front and back glass, as well as the familiarity and reliability of the Touch ID fingerprint scanner:

More importantly, Apple says the iPhone SE is covered in the same hardy glass used on the iPhone 13. While I have yet to drop my review unit, knowing that this will be more scratch resistant offers some peace of mind. I don’t use a case with the iPhone 13, and it’s still pristine, despite having been tossed into bags with keys and other sharp objects. It does pick up fingerprints and smudges very easily, though. It’s also nice that the iPhone SE is rated IP67 for dust and water resistance — something the Galaxy A52 5G and the Pixel 5a also offer.

Unlocking the phone was a breeze, too, and if you’re familiar with the last iPhone SE’s sensor you’ll be used to this, especially since the hardware is exactly the same. In fact, if you’ve never known life without the button below the screen and don’t want to give it up, this is the only modern phone around with it.

A15 Bionic and 5G Connectivity

Johnson lauded the performance of the ‌iPhone SE‌’s A15 Bionic chip, the same exact same chip from the ‌iPhone 13‌ lineup:

The iPhone 8 chassis that the SE uses may be vintage, but underneath lies Apple’s very latest mobile processor, the A15 Bionic. It’s the same one you’ll find in the top-of-the-line 13 Pro Max. Again, the SE costs less than $500, and the 13 Pro Max costs more than twice that. That’s just plain cool. And in day-to-day use, the SE behaves like a phone with a top-tier processor. Apps open quickly, and even the graphics-intensive Genshin Impact runs smoothly. There’s not a lot that the SE can’t do that a $1000-plus phone can.

My personal experience confirms that the iPhone SE is just as fast as the iPhone 13 Pro Max (which is my main phone). It’s not only noticeable in how fast apps open or when multitasking, but also while changing between camera modes, for example.

With regards to 5G connectivity, Johnson said that support for it was “a good future-proofing feature, even if it’s not tremendously useful yet.

Johnson said that the ‌iPhone SE‌ benefits from a noticeable battery life improvement, especially compared to the previous-generation model:

The 2020’s SE weakest point was its sub-par battery life, so one feature that did get a boost this year is stamina. The 2022 SE includes a bigger battery, and power management is improved with the A15 chip. That results in an extra two hours of charge for most users, according to Apple, which checks out with my experience. I got through a day and a half of moderate use, and one full day of heavy use with some video recording, gaming, and a lot of screen on time with brightness boosted.

Cipriani highlighted that most of the ‌iPhone SE‌’s camera improvements are computational and subtle as a result:

The lone 12-megapixel camera is no slouch. While Apple didn’t upgrade the hardware itself, the camera benefits from the A15 Bionic processor and its image signal processor. The end result is a camera that takes clear and crisp photos without any tinkering with settings.

Johnson emphasized the benefits of Deep Fusion on the ‌iPhone SE‌, but criticized the device’s low-light performance and lack of Night mode:

The new processor offers some software-based improvements for this generation, adding Apple’s Deep Fusion technology to boost details in medium and dim lighting. It’s a feature that engages automatically under certain conditions, and there’s no way to tell in image metadata when it’s being used, but I can say that photos of static subjects in crappy indoor lighting look plenty detailed.

However, in very low light, the SE doesn’t do as well. That’s because there’s no night mode, a feature available on many other midrange phones sold in 2022 like the Samsung Galaxy A52 5G, Motorola Moto G Stylus 5G, and of course, the Google Pixel 5A. As a result, images in low light are very dark, and colors look muddled. Night mode on any smartphone has its limitations, and usually isn’t very useful for moving subjects. But it’s a nice tool to have when conditions are dark and flash isn’t an option, and it’s a shame that it’s not included here.

The A15 chip also enables some improved processing for low light video, which does a good job of removing noise, although clips look fairly soft as a result. Still, mobile video is a strength for Apple, and overall video quality on the SE is excellent considering the price bracket it’s in.

I was surprised by how similar the iPhone SE’s pictures were to the iPhone 13 mini’s. From landscapes to portraits of my coworkers, there were barely any differences in the shots taken by the two phones.

Our main complaint about the last iPhone SE’s camera was that there was no Night mode. This year’s model still doesn’t offer one, and though some of the pictures I took of buildings surrounded by mist one night came out muddy, others came out bright and sharp.