A couple of years ago, I took a look at the 2018 Chrysler Pacifica and its Uconnect 4 infotainment system featuring CarPlay and Android Auto, which I found to be a well-designed and visually appealing system with great ‌CarPlay‌ integration. Fiat Chrysler, which merged with Groupe PSA earlier this year to become Stellantis, is now starting to roll out its next-generation infotainment system, Uconnect 5, and I recently had an opportunity to test it out on a 2021 Chrysler Pacifica. 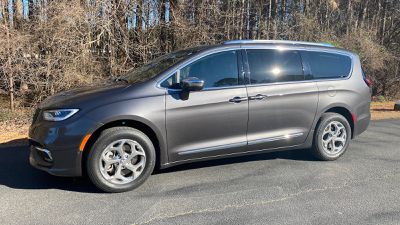 Uconnect 5 was announced just over a year ago, but it’s still in the early stages of making its way into updated models, and the Pacifica was the first to gain the new system. Uconnect 5 on the Pacifica runs on a nice 10.1-inch infotainment screen that’s standard on all trims, although built-in TomTom navigation requires a higher-level trim or package beyond the standard Uconnect 5 system.

One of the key new features of Uconnect 5 is support for wireless ‌CarPlay‌, which has so far been limited to just a few largely premium brands but is starting to roll out much more broadly as an increasing number of manufacturers have undertaken revamps of their infotainment hardware and software.

As with Uconnect 4, I found the new Uconnect 5 system to do an excellent job of integrating ‌CarPlay‌, leaving a persistent, customizable menu bar along the bottom of the display and a thin status bar at the top, even while turning the majority of the display over to ‌CarPlay‌. The result is a nice level of integration, allowing you to easily jump back and forth between ‌CarPlay‌ and the rest of the Uconnect system as needed.

The menu bar along the bottom allows for a dedicated ‌CarPlay‌ icon once your phone is connected, and you can reorder the icons to suit your preferences. Regardless of whether you’re in ‌CarPlay‌ or the main Uconnect system, the top status bar offers glanceable information like time and outdoor temperature, as well as configurable quick-access icons for features like climate control (manual climate controls are also available) and the interior “FamCam” that lets you keep an eye on kids wherever they’re sitting.

Wireless ‌CarPlay‌ setup is extremely simple, requiring just a few taps in settings on the Uconnect system and on your iPhone to get the pairing confirmed. From that point on, ‌CarPlay‌ is a seamless experience, automatically connecting quite quickly once the vehicle is turned on, and I never experienced any lag or glitches over the wireless connection in my testing.

That snappy performance was evident throughout the Uconnect 5 system, with FCA saying that the new hardware that comes with Uconnect 5 has five times the processing power of Uconnect 4 systems. I also found the screen to be high-quality with vivid colors. Overall, the Uconnect 5 system offers a clean, modern layout that will remain familiar to those who have used the previous version.

Uconnect 5 does come with a new Home Screen experience that supports multiple pages, customizable widgets, and more, giving you a quick glance at your most important types of information, although this is less useful is you’re a heavy ‌CarPlay‌ user. With the ability to configure up to five user profiles, preferences such as media, climate settings, and seating and mirror positions can be customized for different drivers. Uconnect 5 is also capable of supporting two simultaneous phone connections.

Wireless ‌CarPlay‌ is great for short trips around town, but if you’ve got a longer road trip planned, you’re probably going to want a way to charge your phone, and that’s where wireless charging comes in. The Pacifica has an optional wireless charging pad located at the base of the console, letting you plunk your phone down and get some juice while you drive.

The charging pad keeps your phone tucked out of the way, which also helps reduce the temptation to pick it up and look at it. I found the pad was plenty big enough to accommodate my iPhone 12 Pro Max, although I did find placement a little bit finicky as it gave me a red error light a couple of times when I put my phone down. A quick adjustment of the phone’s position did, however, quickly change the light to blue, confirming that it was charging my phone.

Unfortunately, while wireless ‌CarPlay‌ is standard with Uconnect 5, wireless charging is not standard on the 2021 Pacifica. The feature is only available on the higher-end Limited and Pinnacle trims, as those are the only two trims that include integrated console designs with room for one.

If you’re interested in or limited to a wired connection, the Pacifica certainly has you covered, with my Limited trim featuring two sets of USB inputs at the base of the center stack with each set including USB-A and USB-C port options. The storage compartment in the center console offers an additional set of USB-A and USB-C ports as well as a 12V power port.

For second-row users, my test Pacifica came equipped with Uconnect Theater, which is great for the kids on road trips. I gave a bit more thorough overview of the system in my 2018 Pacifica review, so I’ll just say that the system includes a pair of 10-inch touchscreens for second-row passengers offering games, media options, and more.

Each seatback screen has a headphone jack and HDMI and USB-A ports for connecting external devices, and a Blu-ray player and USB-A port up front can also be used to send media to the rear screens. Each screen is also paired with wireless headphones and a remote with touchpad and buttons, all housed in storage pockets specially designed for the accessories.

Third-row passengers won’t get their own screens, so they’ll have to watch over their siblings’ shoulders, but at least they get a set of USB-C/USB-A ports for charging their own devices on the Limited and Pinnacle trims. It’s part of an optional package on lower trims.

Aside from all of the infotainment bells and whistles, my Pacifica also came with a number of other technology features including the built in “Stow ‘n Vac” integrated vacuum system with crevice and brush tools, which I took advantage of to clean up after my messy kids. Built-in vacuums are becoming increasingly popular in minivans, and they’re very handy for taking care of messes without needing to haul out a separate vacuum from the inside the house, garage, or basement. Stow ‘n Vac is standard on the Limited and Pinnacle trims and included in that Uconnect Theater Family Group package on the Touring L trim.

While my test 2021 Chrysler Pacifica was a Premium AWD trim coming in at a smidge under $50,000 (there’s an even higher Pinnacle trim for a few thousand more), even the base Touring trim starting at just over $35,000 gets the 10.1-inch screen with wireless ‌CarPlay‌.

Infotainment systems have increasingly become focal points for car buyers, so I really appreciate the uniformity across Pacifica trims and I’d like to see more manufacturers offering high-quality infotainment systems and handy features like wireless ‌CarPlay‌ across all trim levels.

Wireless phone charging remains more of a high-end option, and sometimes a quite expensive one. As seen on the Pacifica, the availability of wireless charging is sometimes linked to other features like higher-end console designs, which is understandable, but I remain hopeful that it will roll out more broadly across models and trims, particularly as wireless ‌CarPlay‌ and Android Auto proliferate and more customers demand an all-wireless experience.