Activity Awards is a new site that offers physical representations of the digital fitness awards that Apple provides when Apple Watch owners meet their goals. 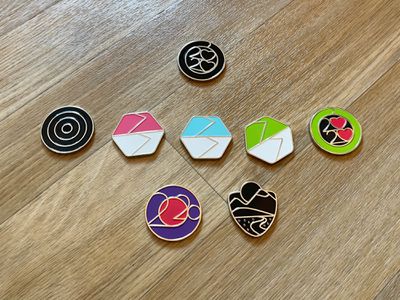 Available in the form of magnets, the Activity Awards are designed to look like the in-app awards that can be earned through the Fitness app. Each magnet is modeled after a different award, with the Activity Awards site offering all kinds of options.

There are awards for meeting goals like 7 day move, exercise, and stand requirements, along with awards for special activity challenges such as the badge that Apple gave out in August for hiking, running, walking, or doing a wheelchair workout of a mile or more.

The magnets are priced from $10.99 to $13.99, and some of them are available in full color or a “black out” mode that’s entirely in black and silver.

The magnets are made in the style of enamel pins and are bright, colorful, and well made. They feel like high-quality magnets, and have a built-in magnetic backing to attach them to refrigerators or other magnetic surfaces.

The Activity Awards have a good weight to them, and the magnetic strength is in line with what I would expect from a premium magnet (I stuck two of them together and it was near impossible to pry them apart).

I did notice some slightly sharp edges on a couple of the awards so I might not let kids play with them, but it doesn’t matter too much on a magnetic surface. Some of the magnetic backs also seem to be cracked in half, and I’m not sure what that means for longevity. I also broke two of the magnetic backs in half by stacking them on top of one another to bring them from one room to another, so if you buy these, make sure not to do that.

All of the designs are close to spot on, and there’s no mistaking the Activity Awards for the Apple Watch awards that are displayed in the Awards section of the Fitness app. You can’t get all of the awards that Apple offers in magnet form yet, but I imagine Activity Awards is working on other options to include in the future.

Activity Awards is not affiliated with Apple and I don’t know what Apple thinks about Apple Watch fitness-inspired awards being made available in a format that’s making money for someone other than Apple, but the site’s founder told me that the Activity Awards are not a 1:1 match to the Apple awards with font and Pantone colors changed for production, plus the design is flat.

The company does want to make it clear that the pins are not coming from Apple and are designed as supplementary and complementary to the Apple Watch.

Every week, I read stories on the internet from people who have been motivated to get fit thanks to the Apple Watch, and working out and keeping up with a routine can be a lot of work. Having a physical representation of a workout achievement that’s visible every day could be inspirational and a reminder of what’s been accomplished.

I think the Activity Awards have the potential to be a nice gift for someone who has put a lot of effort into working out with the Apple Watch, or even a self gift for those who want to be reminded of what they can achieve.

Some of the designs, such as the Yoga Award and the Parks Award are also just objectively nice looking and have a nice, neutral design that Apple Watch owners might like to have on the fridge. Activity Awards does have some quality control issues to deal with, so keep that in mind if you plan to buy these. Treat the magnetic backings carefully, because they can break.