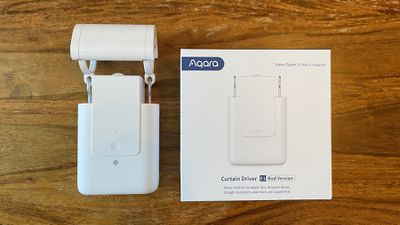 The Curtain Driver E1 hooks onto curtain rods and uses a motor to push curtains open or pull them closed, also offering Zigbee 3.0 and a 6,000mAh battery that can deliver 12-month battery life. Like Apple’s Home app, the Curtain Driver E1 will be updated to support Matter in the future, according to Aqara.

There are two variants of the device, including a rod version for curtain poles and a track version for U-rails and I-rails, and you will need to ensure that you select the correct variant at the point of purchase. The driver can support heavy curtains up to 12kg, but it is worth checking exactly what sort of curtains and rod or track you have against Aqara’s exact compatibility requirements. For example, curtain rods must be between 0.98-inches (25mm) and 1.26-inches (32mm) in diameter and cannot be telescopic. It is also important to note two separate curtain drivers are required for pairs of curtains.

Installing the Curtain Driver E1 is relatively easy. You simply mount the rod hanger over the curtain rod between the last two curtain grommets, extend the driver’s hooks by double-pressing the button, hook the motor onto the hanger, and retract the hooks by double-pressing the button again. This ensures that the motor applies the correct amount of pressure to the rod depending on its size.

The driver also comes with set of eight curtain clips and a rubber strip. The instruction manual suggests using the clips and strip along the top of a curtain, presumably to help the motor pull it along uniformly, but I found this fiddly and unsightly, with the clips scraping along my ceiling, so I left them off and this didn’t seem to affect the motor’s ability to pull the curtain at all.

To connect the driver to the network, open the Aqara app, select the E1 from the list of accessories, and follow the on-screen instructions to set the open and closed positions. If you have two Curtain Driver E1 units, you can bind them together in the app so they operate in sync.

To add the curtains to the Home app, simply select the option in the Aqara app and scan the ‌HomeKit‌ code printed on the curtain driver’s base. The Home app then correctly displays the curtains with relevant controls, so it is virtually no longer necessary to use the Aqara app.

The Curtain Driver E1 requires the use of an Aqara home hub. In this case, I used the Camera Hub G3, which doubles as a feature-rich HomeKit-enabled camera, avoiding the need for a dedicated hub to be connected to the router.

At its core, it is a Zigbee 3.0 hub with support for up to 128 sub-devices and both 2GHz and 5GHz networks, but it also offers a 2K camera, 20 FPS playback, support for two-way conversations, an infrared blaster, 360° rotation with pan and tilt, AI gesture and facial recognition, a built-in privacy mode, local storage, a 1/4-inch tripod mount, a USB-C port, and more.

The camera seems to handle bright, natural sunlight well and nighttime performance is good thanks to its high-resolution. Two-way conversations are possible thanks to a built-in microphone and speaker. It features a privacy mode that rotates the camera inside the body, shows two closed eyes on the front, and provides access to a micro-SD card slot for local storage. If you’re not a fan of the camera’s look, you can easily push off the silicone hood to remove the “ears.”

The camera can locally detect individual faces and can be set to follow people and pets, or be triggered by abnormal sounds, with plenty of conferable settings in the Aqara app. When manually looking around a room or automatically following a person, motor operation is smooth and effectively silent.

Pan and tilt features are not supported natively in the Home app, but if you configure it in the Aqara app, it is displayed perfectly in Apple’s Home app. The camera seemed a little reluctant to tilt upwards when necessary and I noticed that it seems to get quite warm, but otherwise it works extremely well, especially in iOS 16’s redesigned Home app camera views. The hub functionality of the G3 will support Matter later this year, as Matter will not support cameras in its initial release.

I found that the Curtain Driver E1 opened my curtains quickly and fairly reliably. The driver is heavy owing to its large internal battery and it has a bulky design, but it is very good in terms of build quality, and this is all hidden behind the curtain. It is also easy enough to unhook the driver from the rod hanger and charge it via USB-C.

For granular controls, you need to use Aqara’s app. There, you can mitigate motor noise by slowing it down. There are also options to have curtains open very slowly over the course of a period of time to simulate a natural sunrise. Nevertheless, the Home app can be used for basic functions like opening and closing, checking battery level, or if there are any obstructions to the motor’s movement.

The Curtain Driver E1 can be controlled physically by pressing the buttons or by simply tugging the curtain gently in the direction that you want it to travel. The motor detects this and completes the procedure.

However, I would caution users who seek to use the Curtain Driver E1 with longer curtains. In this instance, the top end of the curtains close seamlessly, but the bottom half can be dragged along the floor and not close fully, so the drivers probably work best with curtains that do not reach the floor. I would also warn people that have curtain rods with a support in the middle that there could be some gap left between curtains, and it is not possible to ensure that pairs of curtains overlap to block out light.

Below its status LED and button, the Curtain Driver E1 features a built-in ambient light sensor. Unfortunately, the sensor is not exposed to ‌HomeKit‌ and does not provide an exact reading of lux it detects, but it allows curtains to be opened or closed around the thresholds of “weak ambient light” or “strong ambient light” in automations in the Aqara app.

For more accurate and specific light automations, you can always use another sensor and set up an automation in the Home app. There are possibilities to control curtains with pre-set schedules such as sunset and sunrise, local weather, and geofencing, or connect with other accessories and scenes.

Beyond acting as a hub for the Curtain Driver E1, the Camera Hub G3 allows the Curtain Driver E1 to be controlled with hand gestures. While this is contingent on using Aqara’s app and being located inside the camera’s field of view, there are plenty of other automations possibilities work in Apple’s Home app natively.

The Curtain Driver E1 is also easily paired with other accessories for specific automations. For example, Aqara’s Motion Sensor P1 can trigger curtains to open upon entering a room for the first time in the morning or when an exact light level is reached outside. The motion sensor has three sensitivity modes, a built-in light sensor, a wide 170° field of view, configurable detection timeout, and support for Matter later this year.

With a large battery capacity, USB-C charging, excellent build quality, manual control options, and built-in light sensor, the Curtain Driver E1 justifies its price, but things can start to get expensive if you need two drivers for a pair of curtains, as well as an Aqara hub. It may be one of the best available solutions for retrofitting existing curtains with motorization and ‌HomeKit‌ integration, but it inevitably falls short of more costly, dedicated motorized curtain rails.

I was still impressed with Aqara’s Curtain Driver E1 and it seems to be a great option for customers who want to automate existing curtains in ‌HomeKit‌, especially if they already have just a single curtain or other devices in the Aqara ecosystem, and are willing to put up with a little bit of friction with regards to compatibility, setup, and charging.

For those looking for a hub for the Curtain Driver E1 or a reliable smart home camera, I would also highly recommend the Camera Hub G3. It is by far the most feature-rich and versatile ‌HomeKit‌ camera I have ever used, delivering high image quality and useful object tracking.

The Curtain Driver E1 is Amazon in both North America and Europe (UK, France, Germany, Italy, and Spain), as well as via selective Aqara retailers around the world (availability may vary).