DJI recently announced the Mini 3 Pro, its lightest weight Pro drone that is a successor to other Mini drones that it has sold in the past. The Mini 3 Pro brings high-end camera quality, a tri-directional object avoidance system, and an expansive feature set to one of the smallest form factors that DJI offers. 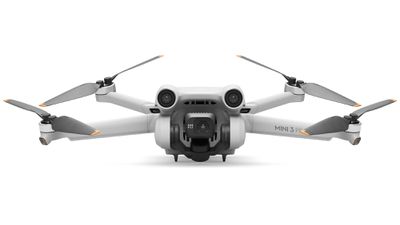 I’ll start this review with the disclaimer that I am by no means a drone expert, so everything I have to say is from the perspective of a casual drone user. I have a DJI Mavic Pro that I like to break out every now and then, but this is the first “Mini” drone I’ve experienced. As someone not accustomed to using a drone on the regular, the Mini was the perfect form factor for me.

Unlike my Mavic Pro, the Mini is small enough that I can tuck it into my backpack or pop it into a suitcase (in a protective casing, of course), and I am less worried about damaging it in travel or during flight. Like most DJI drones, it has fold-in legs and propellers that collapse down, and this is a new design for the Mini line.

The Mini 3 Pro is a 249 gram drone, but it is right at the 250 gram limit, so battery swaps (to DJI’s “Plus” battery) and other accessories will bring it up over 250 grams. At 249 grams, the Mini 3 Pro is under the weight limit that requires registration with the FCC, for those who prefer not to have to do paperwork. It’s supposedly safer to fly too, as sub-250g drones don’t need to be registered because they aren’t considered to be as risky.

Coming in under the weight limit is not a free pass to do whatever you like though, because even small drones are subjected to all FAA regulations in the United States.

In flight, the Mini 3 Pro is responsive, smooth, and basically a joy to fly, it’s a much better experience than my 2016 Mavic Pro, and one of the primary reasons is the controller that can be purchased alongside it. The DJI RC has the DJI app pre-installed, and it includes a 5.5-inch display that’s easy to see even in direct sunlight thanks to 700 nits brightness.

You can purchase the DJI Mini 3 Pro with no controller at all if you already own the RC-N1 (which is the controller that attaches to a smartphone like an iPhone), and that’s $699. With the RC-N1, it’s $759, and with the premium DJI RC controller, the drone is priced at $909. So compared to the RC-N1 cost, you’re paying a $150 premium for the better controller.

I prefer the DJI RC controller because it’s just so easy to pick up the drone and start flying. You don’t need to attach a smartphone to the controller and get the DJI app up and running, it basically just works. It’s a pleasant experience, and it’s nice not having my smartphone in use. I don’t think it’s going to be worth the extra $150 if you’re already familiar with the RC-N1 controller, the DJI ‌iPhone‌ app, and prefer easy access to footage, but if this is your first drone experience or you’re not an RC-N1 fan, the RC is a decent buy.

The Mini 3 Pro has the same general build quality as other DJI drones, and it is crafted from a lightweight plastic material, but it doesn’t feel cheap even though it was built to fit into the sub 250 gram category. It comes with extra propellers and there are a ton of built-in safety measures, but it’s still possible to crash. My test unit had a minor encounter with a tree, but luckily survived with just a couple scuffed propellers. There is a gimbal cover, and it pops right on and off, so it’s easy to pack up the drone when you’re done flying.

You can get DJI Care for the Mini 3 Pro, and if you’re new to drones or a not so great flyer like I am, it’s worthwhile. It’s basically AppleCare for drones, and it’s priced at $79 for a year or $125 for two years. You can get three fixes if you break or lose your drone, with a $65 replacement fee for damage and a $235 replacement fee for a flyaway (only usable once).

As for camera quality, there’s a 1/1.3-inch sensor with an f/1.7 aperture, and video and photo quality is top notch. It records up to 4K 60fps video and can capture 48-megapixel RAW or JPG images, which is a notable improvement over the Mini 2, which was limited to 4K 30fps video. I’ve shared some photos and videos in the review to give you an idea of what you can expect, and in my experience, I got crisp, high-quality video with vivid colors even when the lighting outside was not the greatest. It’s not up to par with some of the higher-end drones like the Mavic 3, as it doesn’t have the micro four thirds sensor.

The DJI Mini 3 Pro is supposed to last for up to 34 minutes on a single charge (extra batteries can be purchased), but that metric is with no wind and there’s not often zero wind at all. I didn’t get 34 minutes, and I think 25 to 30 minutes of battery life on average is more realistic. The Mini 3 Pro is quiet, so if that’s a concern, this is the drone to get.

Moving on to software, the Mini 3 Pro is a “Pro” drone because it has safety and flight features are typically reserved for higher-end DJI drones, and that’s the main reason you might want to shell out extra for the Mini 3 Pro over the more affordable Mini 2. Drones are expensive and when I fly I have constant anxiety about crashing into trees and other objects, or flying too far away. All of the DJI drones are fairly good about preventing you from destroying them, but the Mini 3 Pro goes a little above and beyond.

It includes forward, backward, and downward tri-directional dual-vision obstacle sensing, and for the most part, this safety feature did indeed keep me from flying into any trees. When near an object, the drone wouldn’t get too close, but it is worth noting that it’s not entirely foolproof because there are blindspots at the sides that can cause trouble.

The Mini 3 Pro is using DJI’s Advanced Pilot Systems 4.0 technology, which is the latest software. DJI promises a stable feed at up to 12km, and I don’t know if it was all the trees around or my location, but I couldn’t make it to that distance before I lost connectivity and the drone had to safely bring itself home. Luckily, the Mini 3 Pro’s Return to Home safety features let it come right back to its starting point if it can’t communicate with the controller.

DJI’s multitude of safety features, modes, and sensors result in a safer flying experience, but reading through everything available and the shortcomings is essential, so make sure to download the manual and look it over thoroughly if you pick up the Mini 3 Pro. Some of the vision systems, for example, do not work over highly reflective surfaces, water, in drastic lighting changes, or over super dark or bright conditions, so you need to know the ins and outs of the drone to keep it safe.

There are a lot of fun little features that the Mini 3 Pro supports, and these weren’t available with the Mini 2. They’re useful for social media videos and capturing sports and other action. There are three modes, Cine, Normal, and Sport, along with several different photo and video options.

Cine adopts a lower flight speed (13mph) and dulls the sensitivity of the flight for less choppy video, while Sport mode, which is the fastest mode, ups the maximum speed to over 35mph. Normal is in between and allows for flight speeds up to 22mph. Notably, Sport mode does not support object avoidance, so it should be used with caution. The various video options are outlined below.

If you want a feature rich drone that is not overly expensive, has a raft of safety features and a ton of different shooting modes, the Mini 3 Pro is worth checking out. It’s relatively durable, easy to fly, and comes in under the 250 gram weight limit so it is not subject to some of the same registration restrictions as bigger drones.

The RC Controller is a great flight addition and a solid alternative to the iPhone-compatible controller, and the safety features and improved camera capabilities are nice to have over the Mini 2.

The Mini 3 Pro can be purchased from the DJI website. The drone alone is $669, and the bundle with the DJI RC-N1 (‌iPhone‌) controller is $759. The mini 3 Pro with DJI RC is $909. There are also various Fly More kits with additional batteries and other accessories that can be purchased alongside the drone.

As of now, Mini 3 Pro orders will deliver at the end of June at the earliest, but it will take until August for the more affordable versions with no RC controller to be available.