Mophie in January introduced the 3-in-1 MagSafe Travel Charger, an official MagSafe accessory that directly competes with Apple’s ‌MagSafe‌ Duo. Unlike the ‌MagSafe‌ Duo, Mophie’s Travel Charger can charge three devices at once rather than two, plus it comes with an included power adapter, USB-C cable, and carrying case. 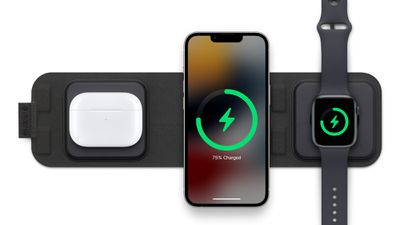 Priced at $150, or $20 more than the $130 MagSafe Duo, the 3-in-1 Travel Charger features a simple tri-fold design. It includes a pop-up Apple Watch charger that supports Nightstand Mode, a ‌MagSafe‌ charging puck, and a Qi charger for wirelessly charging AirPods.

Each of the three chargers has black plastic bases, but two of the actual charging pucks are Apple components. Belkin used to be the only company that had access to Apple’s official ‌MagSafe‌ charging hardware, but now other third-party companies can get the components. Mophie’s charger is using Made for iPhone certified Apple Watch and ‌MagSafe‌ charging hardware, while the Qi charger is a standard coil underneath the plastic base.

I’m not a fan of the black plastic that’s being used for the bases of the chargers and for the single Qi charger because it feel like cheap, low-quality plastic, but it probably keeps costs down and it’s also lightweight so the entire charging trio is fairly light. The outer casing features a heather gray/black fabric, and the chargers fold over one another into a compact square-shaped package.

The folded-up Travel Charger fits inside a felt travel pouch that also houses a USB-C charging cable for power purposes and a 30W power adapter that offers enough juice to charge an ‌iPhone‌ at 15W (12W for iPhone 12 mini and iPhone 13 mini), an Apple Watch, and the AirPods at 5W. The Apple Watch charger is not able to charge the Series 7 models at the faster charging rate as it is not a fast charger.

Everything included is basic and no-frills, but it’s not unattractive and I appreciate that Mophie has included all of the components that you need to use the charger in one easy to carry package.

For travel purposes, I think Mophie’s 3-in-1 Travel Charger is ideal. Everything packs up into one neat case, and it’s easy to get the components in and out when needed. I travel fairly often and have been using the ‌MagSafe‌ Duo, but I like that the Mophie charger has an extra spot for AirPods.

The ‌MagSafe‌ charger included with the Mophie accessory is essentially identical to Apple’s own ‌MagSafe‌ charger. In my testing, it was able to charge an iPhone 12 that was dead to 33 percent in a half hour, which is about the same result that I see with a standard ‌MagSafe‌ charging cable.

Though designed for AirPods, the 5W Qi charging base of the 3-in-1 Travel Charger can be used with an ‌iPhone‌ as well, though charging will obviously be slower. The ‌MagSafe‌ charging spot can charge non-MagSafe phones (with no magnetic alignment) and it can also be used for AirPods, so those two spots have some versatility depending on the mix of devices you need to charge up.

See also  Review: Anker's PowerWave Go 3-in-1 Stand Charges Your Apple Devices at Home and on the Go
Powered by Inline Related Posts

If you travel a lot and hate dealing with cables, Mophie’s 3-in-1 Travel Charger is convenient, and it’s also the best portable ‌MagSafe‌ charger on the market. I much prefer it to Apple’s own ‌MagSafe‌ Duo because it has an extra charging spot and comes with the charging cable and USB-C power adapter that I need to charge at full speed.

It’s not the best looking charger, but it’s perfectly serviceable and worked well in my testing. On the downside, it’s expensive at $150, but it is priced competitively with other multi-device ‌MagSafe‌ charging solutions that are on the market and worth considering for those who have a need that it meets.

The 3-in-1 Travel Charger from Mophie is an Apple exclusive and can be purchased on Apple’s website for $150.