Last week, Transcend launched a 1TB version of its JetDrive Lite 330 expansion card for the 14-inch and 16-inch MacBook Pro, giving users a convenient way to add significant amounts of storage to their machines without any extra bulk. I’ve had a chance to spend some time with the new card, and while there are limitations for some of the things you might want to do with it, the JetDrive Lite 330 can be a very handy addition to your setup. 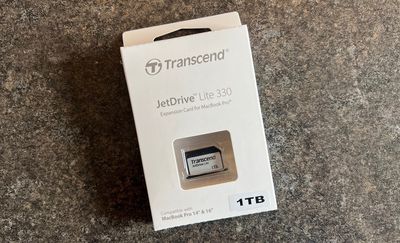 While the JetDrive Lite 330 is at its heart simply an SD card, the novel aspect of it is that it’s designed to specifically fit flush with the MacBook Pro’s edge, allowing you to essentially leave the card inserted at all times without having to worry about the card or the slot being damaged from pressure being put on a normal-sized SD card that sticks out a bit.

The JetDrive Lite 330 has a thin plastic face that rests up against the edge of the MacBook Pro, and it provides just enough of a surface to get a fingernail behind it to remove the card. It’s a simple but great design that all but guarantees the card will stay in place throughout day-to-day usage, packing your machine in and out of a bag, and more.

Transcend says the JetDrive Lite 330 card offers read speeds of up to 95 MB/s and write speeds of up to 75 MB/s per second, and I came close to that in my testing, with Blackmagic Speed Test registering roughly 90 MB/s and 75 MB/s respectively. That’s of course well over an order of magnitude slower than the internal SSD on a MacBook Pro or even a Thunderbolt or USB 3.1+ external drive, but for certain tasks, it’s definitely sufficient.

Given the transfer speeds, you definitely can’t use the JetDrive Lite 330 as a boot drive or anything where you’re rapidly reading and writing data. It’s simply not designed for those tasks, but it’s ideal as some extra onboard storage for documents, media, and other types of data.

One popular use case for the JetDrive Lite is as an onboard Time Machine backup drive, and the new 1 TB capacity option makes this a more reasonable solution than ever. My 16-inch MacBook Pro has a 1 TB SSD, but only about 230 GB is currently used. It’s frequently recommended that your Time Machine drive be at least two or three times as large as the drive you’re backing up, in order to have enough room to save a sufficient amount of history, so this new 1 TB JetDrive Pro 330 is perfect for me as a test case.

It should be obvious, but it’s important to note that onboard Time Machine storage isn’t an ideal solution, as if your Mac is lost or stolen, so is your backup. I back up to an Apple Time Capsule at home (offsite backups would be even safer to protect against larger losses such as a fire or home burglary), but I’m currently doing a lot of international travel and the JetDrive Lite is a great way to tide me over with some sort of backup without needing an online service or potentially cumbersome external drive solutions.

Setting the JetDrive Lite up as a Time Machine drive was incredibly simple, with the card being recognized as a standard drive in Finder immediately after insertion, and then showing up in Time Machine settings as an available backup destination. Once I selected it and initiated Time Machine, it took a little over 80 minutes to complete the initial backup. Subsequent backups have taken no more than a minute or two as Time Machine looks for changes and pushes 500 MB or so onto the card.

Once I’m done with my international travels and back to regularly backing up at home, I’ll be able to make more use of the JetDrive Lite 330 for general storage, perhaps bringing some music and photos over that currently live on external drives. Having all of that accessible right from my Mac without having to worry about carrying external drives is nice.

Apple charges $400 to double the storage on a MacBook Pro from 1 TB to 2 TB, and of course a single speedy 2 TB drive has certain benefits over this JetDrive Lite solution, but the reverse is also true. The JetDrive Lite offers additional flexibility as it can be easily added after the fact and can be removed as needed for safe storage or transfer to another machine.

See also  iPhone 12 Pro Max Reviews: 'The Best Smartphone Camera' You Can Get, But 6.7-Inch Display Isn't for Everyone
Powered by Inline Related Posts

Transcend offers a JetDrive Toolbox app for Mac and Windows that supports a couple of functions like tools for recovering deleted files and automatically unmounting and remounting the card depending on your machine’s standby status in order to save power, but unfortunately, it’s not compatible with M1-based Macs.