Anyone invested in the Apple ecosystem will have had to confront the need for multiple USB-C ports when they’re home and away, with iPhones, iPads, and Macs all vying for the connectivity these days. But in many cases, there’s still a lingering need for USB-A to charge older devices, and that’s where Ugreen’s 4-in-1 100W GaN X Fast Charger comes in handy. 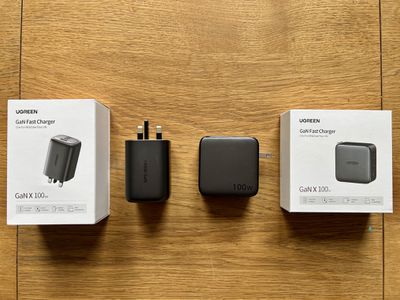 The charger packs three USB-C ports along with a single USB-A port, but despite that throwback it offers the latest Gallium Nitride technology, which is popular with modern power adapters because it allows for better power efficiency that results in smaller product designs more suited for travel.

I had the opportunity to test Ugreen’s multi-port charger in both its UK and US variants, and the first thing to note is that the US version is the more portable design. It’s a slender square brick that fits in the palm of your hand – it’s a little smaller than Apple’s 67W UK charger that comes with the 14-inch MacBook Pro, and benefits from the two-pin A plug’s ability to fold away inside the body.

By contrast, the UK model has more of a bulky cuboid shape with rounded corners, and the three-pin D plug isn’t foldaway or retractable, making it harder to slip it neatly into a travel bag without snagging on something.

Other than that, both models are functionally identical and feature a built-in “Power-X” power delivery system that can intelligently adjust the power output to protect a device’s battery. Essentially, the power distribution system allows the charger to adjust the power provided to each port based on what’s plugged in. The top two ports are capable of delivering a maximum of 100W, while the third is capable of up to 22.5W, and the bottom USB-A port offers 22.5W.

Ugreen claims that this means it can charge an iPhone 13 to 60% in 30 minutes or fully charge a 16-inch MacBook Pro in 1.5 hours, and thanks to the latest GaN chipset, it’s three times faster than Apple’s standard iPhone charger. Those claims stood up to scrutiny in my tests, although the big caveat here of course is that they only apply when one device is plugged into the charger and in the relevant port for its power requirements.

Ugreen includes a graphic (shown above) that explains the variable wattage of the different ports based on what’s plugged in. For example, if you have two devices connected to the first two (100W) ports, the top port outputs 65W and the second port delivers just 30W. As you’d expect, the charger’s power output gets divvied up further the more devices you connect. For instance, when all four ports are occupied, the first (100W) port tops out at 45W, so you have to consider what you’re plugging in if you want to prioritize a particular device for fast charging at maximum wattage.

Unfortunately neither the US nor the UK model has the max wattage marked on the individual ports, so I wasn’t always sure which port was the right one to use to get, say, the full 100W to power my MacBook Pro, but it didn’t take too long for me to memorize them so I didn’t have to keep referring back to the included manual. Remembering all the variable combinations however is a little more tricky – it’s better off simply accepting that the more devices you’re charging, the longer they’ll all take to reach full battery capacity.

The chargers also feature an “Over Temperature Protection” system that takes five temperature readings every second for extra security, which is the kind of feature that’s not obvious but is nevertheless good to know exists.

Ugreen could have designed this 4-in-1 charger to be larger unit with a fixed power output to several USB-C devices, but instead it has opted for a more compact brick with variable power distribution. This shouldn’t be a problem if you intend to use it to charge a number of devices overnight, but if you’re looking to fast charge a single power-hungry device like a MacBook Pro then you’re better off treating this as a solo charger or opting for a more bulky alternative.

The addition of a USB-A port is a welcome nod to the number of older devices still in circulation, and adds to the charger’s flexibility, even if that does mean sacrificing a fourth USB-C port. All in all, this makes the Ugreen 100W Charger an accommodating, travel-friendly unit (especially the US variant) that’s certainly worth having on hand when you’re away.