Since 2020, Apple has been working to eliminate Intel chips by transitioning the entire Mac lineup to Apple silicon chips, and 2022 is expected to be the year when the transition is completed. One of the major Mac lines still using Intel chips is the Mac Pro, but a refreshed model is in the works for 2022. 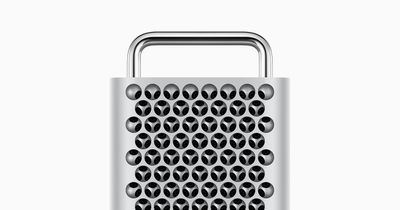 This guide covers everything that we know about Apple’s plans for the updated ‌Mac Pro‌.

Mac Studio and the Future of the Mac Pro

There were rumors of a smaller version of the ‌Mac Pro‌ in development, but that machine turned out to be the Mac Studio, a separate product line introduced in March 2022. The Mac Studio is a cross between a ‌Mac Pro‌ and a Mac mini, and it features high-powered M1 Max and M1 Ultra chips. The ‌M1 Ultra‌ in the ‌Mac Studio‌ is already faster than the 28W Intel Xeon chip, but Apple still has plans to refresh the ‌Mac Pro‌.

At the ‌Mac Studio‌ event, Apple made it clear that the smaller desktop machine is not a Mac Pro replacement. Apple senior vice president of Hardware Engineering John Ternus went as far as confirming that there is a ‌Mac Pro‌ coming “another day” to clear up any confusion about the continuance of the ‌Mac Pro‌ product line, and we’re expecting a new ‌Mac Pro‌ in 2022.

The ‌Mac Pro‌ is expected to continue to use the same stainless steel frame and aluminum housing with dual-sided logic board and easy access to the interior for adding and removing components. There’s been no word on whether the thermal architecture will change, and it will still feature the same three-dimensional interlocking hemispheres for heat dissipation purposes.

We haven’t heard word of any design refreshes for the ‌Mac Pro‌, so while there could be internal updates, the exterior will likely remain largely the same. The main focus will be on the transition away from Intel chips to pro-level Apple silicon chips.

The high-end ‌Mac Studio‌ is equipped with an ‌M1 Ultra‌ chip that’s essentially two ‌M1 Max‌ chips connected together, and the ‌M1 Ultra‌ features a 20-core CPU and up to 64-core GPU. It outperforms the 28-core Xeon ‌Mac Pro‌ with the highest-end graphics card, and the ‌Mac Pro‌ is expected to feature an even more powerful successor to the ‌M1 Ultra‌ that will be equipped with 40 CPU cores and up to 128 graphics cores. The chip will be called the M1 Extreme, and it will be offered in higher-end ‌Mac Pro‌ models. Lower-end models will use the ‌M1 Ultra‌.

The ‌Mac Pro‌ is expected at some point in 2022, and it could be introduced as early as June, perhaps at the Worldwide Developers Conference. Apple could preview the machine at the event and then release it later this fall, giving developers some time to prepare pro software for the more powerful Apple silicon chip.